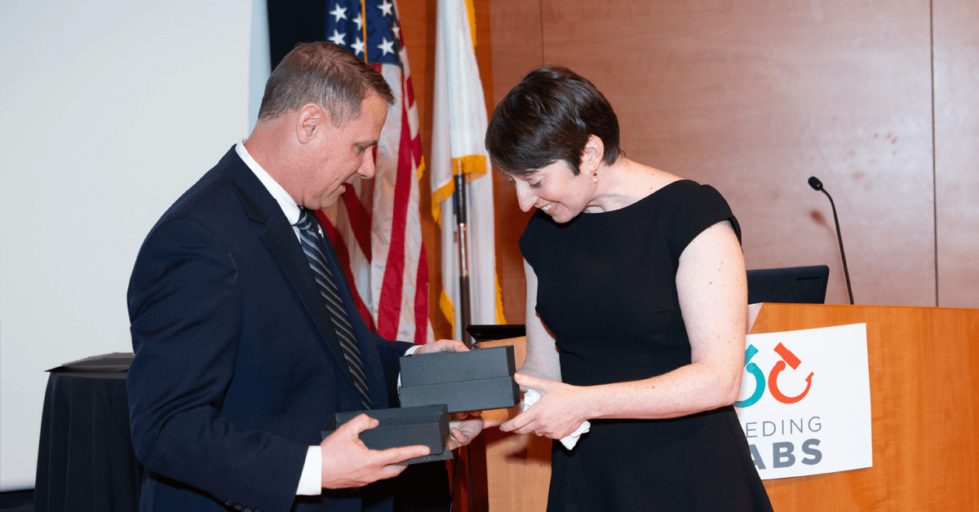 Over 16 years at Seeding Labs, founder Dr. Nina Dudnik’s pioneering efforts to break down socioeconomic and geographic barriers has resulted in the robust community that we have today.

At Positively Instrumental 2019, we saw her vision realized: a global movement, united around the goal of ensuring the most talented scientists worldwide have the resources to do what they do best: research, innovate, and discover.

Under her leadership, Seeding Labs’ partnerships grew to more than 150 private and public-sector partners that have equipped 72 institutions in 35 developing countries with the tools and training they need to fulfill their ambitions.

For all of her achievements as leader of Seeding Labs, David Qualter, VP of Operations, honored Seeding Labs’ founder Nina Dudnik at Positively Instrumental 2019.

Here’s an excerpt of David’s tribute to Nina:

“It’s hard to find the words to convey our appreciation for Nina. She’s the reason we are all here tonight... the leader of this movement that has grown from the basement of Harvard Medical School to an international force impacting 35 countries worldwide, and counting.

As a leader, she is brave enough to stand up to address an issue when no one else will. She has to be willing to withstand challenges. She has to be determined to overcome obstacles. And she has to be public.

She has to be the kind of leader that others want to follow. Nina has embodied all of those characteristics throughout her 16 years as the leader of Seeding Labs.

Nina had the outrageous idea that useful equipment shouldn’t be put into storage or thrown away. She knew that equipment in the hands of smart, talented people could make the difference to researchers all around the world.

She attracted like-minded students and organized them to save equipment and give it to scientists who were returning to their own labs in their home countries.

However, she knew that this wasn’t enough. So she had the audacity to start a company, a social enterprise called Seeding Labs, to address the resource imbalance and increase the impact of this movement.

Nina, tonight you are surrounded by many First Followers. We’ll follow you on the next steps of your journey and as you continue to inspire people, like you have all of us.”

For her leadership of Seeding Labs, David Qualter presented a Founder’s Award to Nina Dudnik commemorating the global movement she built during her years as CEO.

She was also presented with a special commendation from US Senator Ed Markey (D-MA) in honor of service to her community.

Photo at top: At Positively Instrumental 2019, David Qualter, VP of Operations at Seeding Labs, presented Dr. Nina Dudnik with a Founder's Award in recognition of her 16 years of leadership as Seeding Labs' founder and CEO.