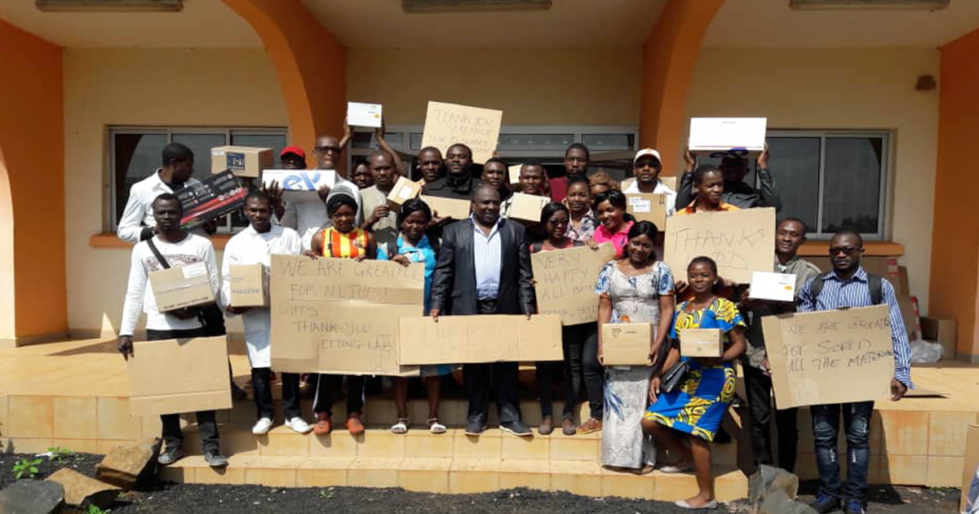 Pictured above: Dr. Jules-Roger Kuiate celebrates with students in the Department of Biochemistry at the Université de Dschang as equipment from an Instrumental Access award arrives on campus in Cameroon.

Dr. Jules-Roger Kuiate’s department at the Université de Dschang in Cameroon educates 2,000 students each year. He and his colleagues in the Department of Biochemistry are also tasked with a robust research agenda focused on African sleeping sickness and antimicrobial drug discovery.

Yet, 5 years ago, the department lacked many of the tools they needed to finish their research and provide practical training for students. When Instrumental Access equipment arrived on campus in July 2018, Dr. Kuiate saw a path forward.

“Now we have the materials to begin the work,” Dr. Kuiate says.

The challenges of completing research

When Dr. Kuiate applied for an Instrumental Access award, the Department of Biochemistry had some promising research in progress on medicinal plants and tropical diseases. But the department had  little infrastructure to efficiently carry these projects to their conclusions.

Prior to the Instrumental Access shipment, faculty members were working to understand more about trypanosomes—parasites that cause sleeping sickness in both humans and cattle across sub-Saharan Africa. Their investigation centered on finding genetic markers that would indicate a particular strain’s likelihood of resisting drugs that combat the sickness called trypanocides.

Though the project had begun collecting samples and outlined its process, researchers were stuck. Their existing lab equipment was insufficient for the task, and progress was slow.

“People have another view on what we are doing”

When the department’s Instrumental Access equipment arrived in July 2018, researchers had the tools they needed to move forward with their research.

The department’s investigation into trypanosomes advanced, as they were able to use Instrumental Access equipment to successfully isolate and identify subspecies of the T. congolense strain. They found regional differences between the Northern Sahel zone, which is semi-arid, and the southern temperate forest zone.

Yet, Dr. Kuiate insists that the impacts of Instrumental Access equipment are far greater than the progress visible in a single research project.

In Cameroon, the world of higher education began to see the university’s work in a new light, as they approached scientists at Dschang with additional partnerships and research opportunities.

“Since receiving the Instrumental Access equipment, people have another view on what we are doing,” he says. 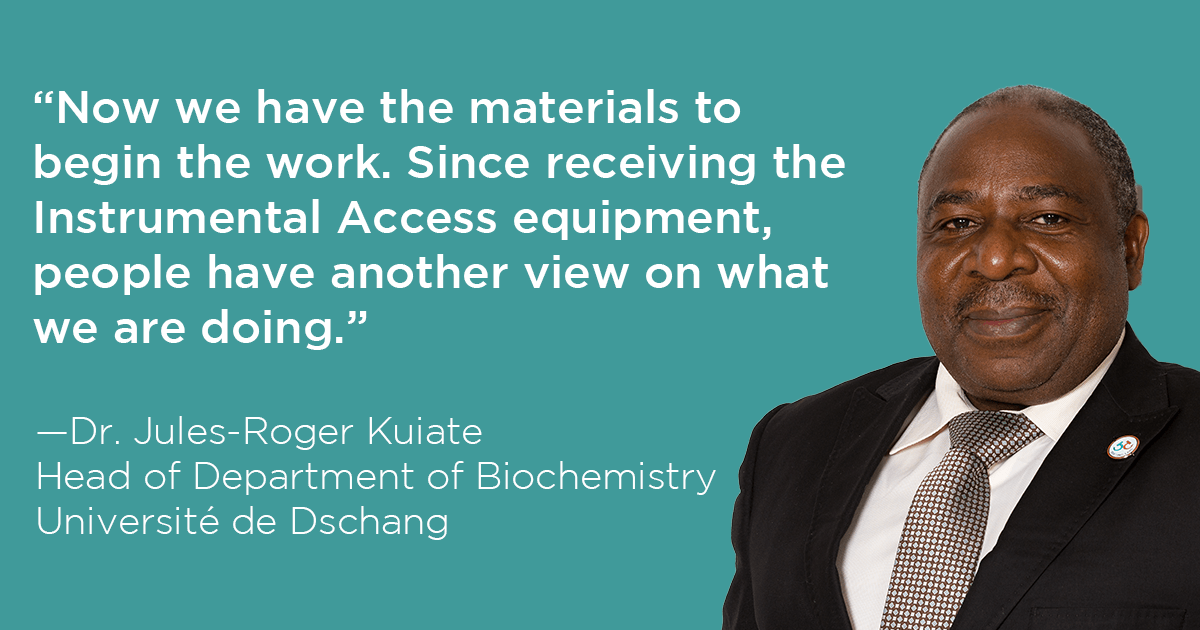 Colleagues from across the university have actively sought out the department to collaborate and to help with complex analysis key to other departments’ projects. Dr. Kuiate says that the department’s increased expertise has led to increased contact from colleagues who had not previously visited their labs. More students are interested in studying in the department to get hands-on experience with the equipment.

“Officials in the Ministry of Higher Education have also reached out to see how they can support our work,” Dr. Kuiate says.

The Ministry recognizes the Department of Biochemistry’s faculty as experts in their field with the capacity to carry out complicated analyses.  And such consideration from the Ministry has already led to a partnership in the corporate sector.

Recently, the department was called upon to perform an analysis of the quality and safety of cosmetic products made in Cameroon. Using equipment from Instrumental Access, they were able to suggest microbiological improvements, which are now being implemented, to the products.

“This is something very good for us,” says Dr. Kuiate, “because we are now looked at in another way.”